Every Motorsports event has a main show, and if you were not there purely to see the Mazda 767B go around the track, then you were likely there to see ‘The Big Guns’.

This term refers to the big teams that show up to contest the top spot of the top class, Pro class. In Pro class the drivers are all professional, and the cars are professionally built.

Within the Pro class, you find the wildest machines, the highest power and the fastest times, of course.

Teams like Scorch Racing with their S15 Silvia, the fastest Silvia time attack car on the planet. Definitely the people’s choice going by crowd reaction and hype. Under Suzuki narrowly missed out on the crown, but will be back in 2015 to have another crack and better his time of 1:24.8800.

We have Australian teams like MCA Suspension with their Onevia rocket. Driven by Shane Van Gisbergen, they came in a very respectable 3rd with a time of 1:25.7090. 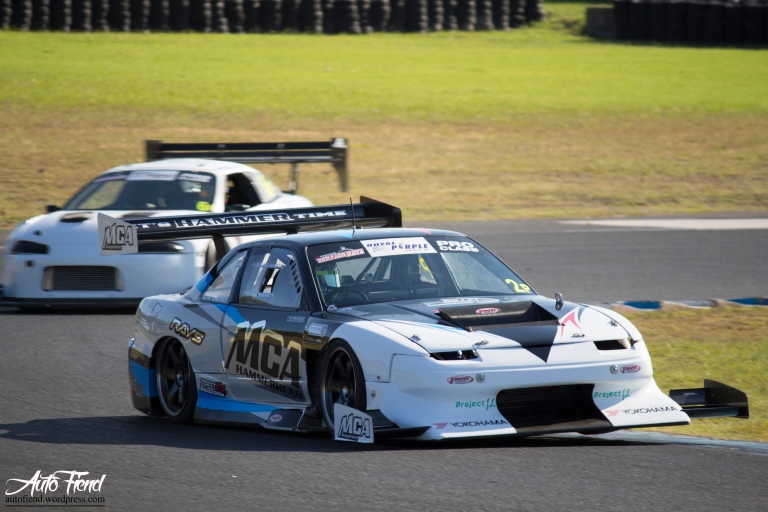 I highly recommend watching this video of one of his laps to see just how full on these cars are to drive.

The Hurricane RX7 built by RE-Amemiya was back again, though this year they had a different driver, instead of the usual Nobuteru (Nob) Taniguchi, Manabu (Max) Orido was piloting the vehicle this year.

All the machines that returned from 2013 were sporting new and improved aero packages.

The proof of both driver change and aero alterations is really in the pudding (results), I am not sure if there was an increase in power though, as this is a figure many of these teams keep very close to their chest.

After all it is a competition.

There was a mountain of hype and excitement around the Kyusha Danji R34 prior to the event, enough so that I have elevated it to ‘The Big Dogs’ post even though the car competed in the PRO-AM class (Amateur driver).

The R34 was a real crowd favourite, with such large and attention grabbing aero, as can be seen in the articles opening image, everyone was watching the driver Miyata Sumihiko as he clocked his PB of 1:31.6856.

And what an imposing figure it cut’s.

Of all the cars competing though, The Tilton Racing Evo had the most weight on it’s shoulders, having won the event in 2013 with a time of 1:24.8550, the rest of the pack had made huge improvements and were all much faster than last year.

The other teams still couldn’t match the 2013 time, but could the team improve for 2014 and ensure they locked the others out of top place.

It was a hard fought campaign in 2014 and there were some close calls.

But ultimately, the Tilton Racing team came out on top with an improved time of 1:24.8412, once again cementing themselves at the top of the table for World Time Attack supremacy.

An incredible event and awesome spectacle. We will certainly be back again in 2015 and as many years as it continues. We simply can’t get enough of Time Attack, and really who can.

Thank you for looking through our coverage of the World Time Attack Challenge 2014, and stay tuned for the various other articles we have coming up.